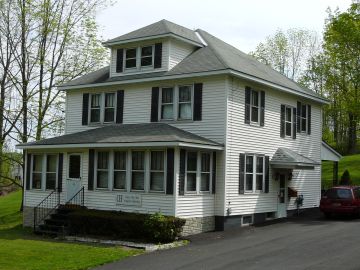 The work began in the heart of Dorothy Pisauro, wife of Rev. William Ross Pisauro, pastor of the Honesdale Gospel Tabernacle. Mrs. Pisauro initiated some Good News Clubs in the 1940’s. Child Evangelism Fellowship of Wayne County was Officially Chartered on August 6, 1952. Mrs. Pisauro continued to lead the work in those early years establishing and maintaining Good News Clubs and released time classes. She was a stern woman with a love for children and held in great respect from children and teachers alike.

In the early 1950’s, a Mr. & Mrs. Martin acted as directors of the ministry. Unfortunately little is known about the events that took place under their direction.

On January 2, 1956, Miss Johanna Posthuma became the director of C.E.F. of Wayne County.  She was introduced to the ministry in the summer of 1955 when she served as a summer missionary with CEF of EPA. Miss Rachael Zook was sent from the state office as acting director from the fall of 1957 until the summer of 1958 when Miss Johanna took a leave of absence.

The work flourished under Miss Johanna’s leadership. In August of 1958, the ministry expanded to include Pike County. Additional released time programs were started. The summer ministry grew. In 1960, 52 5-Day Clubs were held with 532 children attending. In 1960, the ministry was incorporated under the name Wayne-Pike Child Evangelism Fellowship, Inc. In November of 1961,the office was moved to 160 Grandview Ave., Honesdale. On November 3, 1965, the National Teachers Training team held a one-day seminar to train teachers in our area. Miss Johanna remained director until September of 1968. Other full time workers who served with Miss Johanna were Marilyn Davis, Mary Ann Hartman, and Louise Shissler. Even though she resigned as director in September of 1968, she continued until January 2, 1970 as a full time worker under the new director Dan Baker. Committee members in those days included Friend Ammerman, Richard Gregory, Gerald Locklin, Dorothy Pisauro, Henry Robinson, Lyle Frisbie, Lawrence Seely, Dwayne Theall, Robert Wilson, Jim Richner, and Ernest MIller.

Dan Baker was hired as a new worker in June of 1967. In September of 1968, he became the director. In April of 1970, Russell Gillow was accepted as a member of the committee. He co-chairs the committee now fourty years later. Dan Baker served as director until 1972 when he became pastor of Canaan Bible Chapel. In early 1969, Elmer Zapp and Ron Adolphson were added to the committee.

From 1972 until 1978, Bill Frisk and his wife, Ruth, directed the work. No records exist from the years of their direction. The office moved to an apartment on Parkway Drive when Miss Virginia from the state headquarters served as interim director.

Mr. Frank Westcott served as director in the early and mid 1980’s. During his tenure, the Wayne-Pike CEF office was moved to an office which was rented at 110 Ninth St., Honesdale, in the Masonic Building. The ministry was quite active under his direction.

David and Jennifer Lebo served as interim directors in the late 1980’s. It was in those years that Wayne-Pike CEF conducted their first day camp. In the times when there was no director, Miss Virginia Landis, field worker from the C.E.F. of Eastern PA state headquarters, acted as director.

In October of 1990, Bob Longenecker became the director. At that time there was only one released time class being held. The ministry has grown since then. More released times classes have started. 5-Day Clubs increased and additional day camps were started.

In September of 1997, Miss Rhonda Johnson, who had served eight consecutive years as a summer missionary, was hired as a full time field worker. She served in that capacity for three years. Our small one room office was outgrown, and in May of 1998, our office moved to 823 Court St.

In October of 2002, Pastor Ken Lindow joined our staff as a part time field worker. He served in that capacity until the spring of 2005 when he became a full time pastor.

John Kornbau came to work as a full time field worker in January of 2006. The ministry has continued to grow and reach many boys and girls with the gospel of Jesus Christ.  On September 1, 2013, God called John Kornbau to become the director of CEF of Lackawanna County.

Caleb and Abby Landis started in the beginning of January, 2014 as assistants to the director.  We are very excited to see what God is going to do through them.

The Financial Policy of CHILD EVANGELISM FELLOWSHIP OF EASTERN PA, INC. is to “ask God and tell His people.” All directors and other full-time workers should be willing to work on a faith basis of receiving a full or partial salary.

This site uses Akismet to reduce spam. Learn how your comment data is processed.